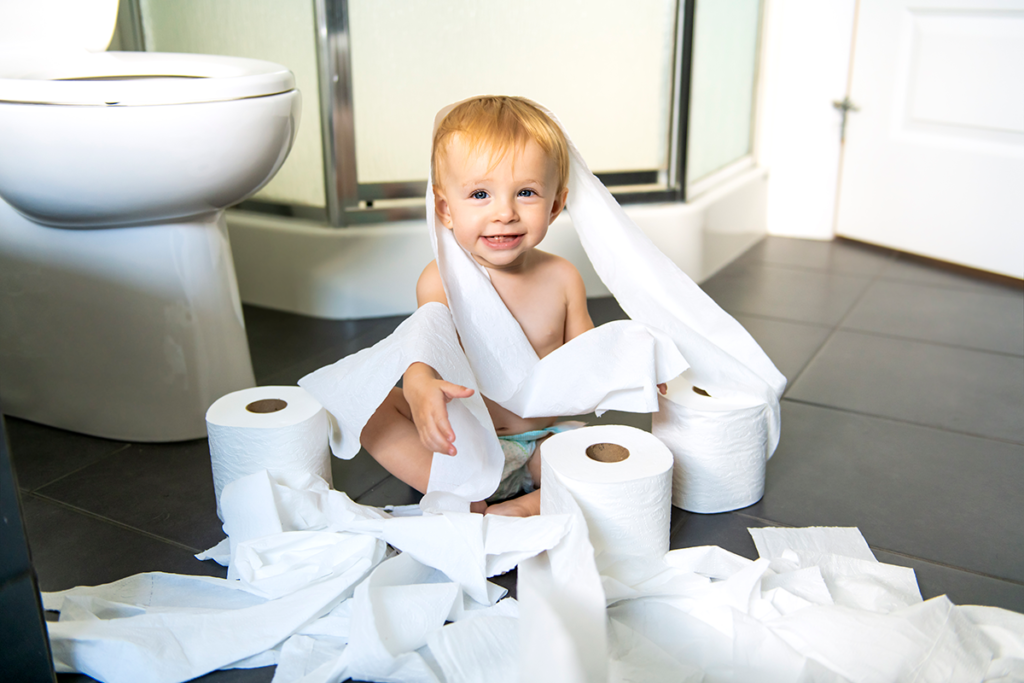 We love being parents, but sometimes you turn your head for one second and suddenly everything is chaos! One of those times is when your toddler discovers the toilet can flush: toys, makeup, Rolexes…So how do you unclog a toilet that has fallen victim to their wrath?

Here are some tips you can try before calling in the big guns here at Michael’s! These tips are listed from first resort to last resort, so try them in order:

1. Put on rubber gloves. Empty the standing water out of the bowl, using a coffee can or similar small cup. However, don’t empty it completely, in case you have to use a plunger, because the plunger head will, of course, need to be submersed. Now that it’s easier for you to get your hand in, see if you can’t just grab onto the object and pull it out.

(Note: Don’t try to flush! You would probably never try that with a toy, anyway, but this is a good rule to follow if your toilet is clogged with a diaper/toilet paper/etc. Even if you think whatever the blockage is should be able to go down on its own, trying to flush may just cause your toilet to overflow and make a giant mess. Also, speaking of giant mess, you will want to lay newspapers all around the perimeter of your toilet before trying any of these DIY plumbing tips, just in case!)

2. Now, you’re probably thinking, “Of course I tried to just grab the toy, and that didn’t work! That’s why I’m reading this blog!” Yes, it’s likely you’re going to have to use more “extreme” measures. So, next, take a wire coat hanger, and untwist it (what you want is a straight piece of wire). Then, make a loop or hook shape to try and very slowly and carefully retrieve the toy with!

3. If that doesn’t work: time for the plunger! Don’t use a cheap plunger without a “flange,” though. It needs the flange — the piece of rubber on the underside of the cup — in order to create a better seal, which can be further improved by letting hot water run over it (because then the rubber is softer). Next, if you don’t know how to plunge a toilet with the correct motion: push down slowly, and lift up quickly. It should be a sharp motion.

4. Call in the professionals. If you know how to use an auger/snake, that has a crank handle you turn, and a coil on the end to hook an object like a toy…go ahead and try it! Crank until it is difficult to keep going (resistance) and pull the snake out…hopefully, with the toy on the end of it!

For the average person who’s never used one of these before, though, it may be safer to skip this step and go straight to calling one of our professionals at Michael’s Plumbing. Schedule an appointment or give us a call at (407) 219-9772. We’re always ready to assist, and it’s better to get an emergency like this taken care of sooner rather than later. (Plus, your child will want their toy back, after it is thoroughly sanitized!)