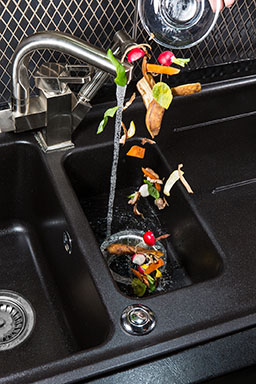 It’s not every day that you’re sitting around thinking about your kitchen’s garbage disposal, but you’d be surprised to learn there’s a lot of history behind this taken for granted device.

If you’re not familiar with a garbage disposal, it is an electrically powered device installed under a kitchen sink between the sink’s drain and the trap. The garbage disposal shreds food waste into pieces small enough to pass through plumbing. In the United States, 50% of homes have a garbage disposal.

Issues arose in the 1930s and 40s as many cities had regulations prohibiting the placement of food waste into their sewer systems. Using a marketing campaign, Hammes influenced many cities into lifting their restrictions to allow for garbage disposal units.

Today, garbage disposals help to reduce harmful food bacteria and make cleaning up the kitchen easier. A garbage disposal will last many years if used and maintained properly. That’s why being aware of what shouldn’t be thrown down it is so important.

Here are a few common items that should not be thrown down a garbage disposal:

Michael’s Plumbing – Providing First Class Plumbing Service to Orlando and all of Central Florida since 1990.