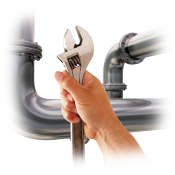 The home maintenance tips that you find on the internet can really be hit or miss, oftentimes making it difficult to decipher what is a fact and what is a myth. We’re here to clear up some of these misconceptions about your home’s plumbing.

1.Myth: You can ignore small drips and leaks.
You should stop ignoring that leaky faucet. These drips can amount to thousands of gallons a year in wasted water.

3.Myth: You don’t need to call a plumber, anyone can fix plumbing problems.
There are fixes that most people with plumbing knowledge can do just fine, like replacing a faucet. However, for more difficult tasks it’s usually better to use a licensed plumber. You may think you’re saving money by not hiring a licensed plumber, but the reality is if you don’t know what you’re doing you could end up causing major plumbing damage if something goes wrong, which will cost you much more money than those few dollars you thought you were going to save by fixing it yourself.

6.Myth: Put a brick in the back of your toilet tank to save water.
Bricks will deteriorate, causing other things like the flapper to break. You could also end up displacing too much water so you’ll have to flush twice.

Michael’s Plumbing – Providing First Class Plumbing Service to Orlando and all of Central Florida since 1990.